Skip to content
Friend of Ribit Tom Hitchcock, CEO of Purple Patch Consulting, often shares his considerable knowledge about getting into the job market with groups of students at universities. Check out Tom’s piece on the science of branding, and you can also access his tool on how to build your own unique brand.

Read what he has to say below

Want to have a personal brand that works for you? First you need to understand: Where does the word come from? To brand is Ancient Norse meaning “To burn.” Different attributes of a brand


How do companies create a brand?
There are many ways organisations create a brand. They start by trying to define what makes them different from the competition – or their Unique Selling Proposition (USP).
This starts with the What? Why? and How? These translate into the three ‘Ps’: Proposition, Purpose and Personality.
If you think about the evolving versions of brand, it’s clear to see how going through each of these steps can create a distinct identity. What is vital is that the brand promise matches the reality. For example, if a business advertises itself as doing thing differently or being innovative, but it’s using the same standard methodology as its competitors – that’s false. Therefore, it’s important to be 100% honest. It’s common to find a different USP than what you thought you had. It’s a bit of a soul searching practice.
The table below gives examples of questions on each category to get the ball rolling.

The Why is at the centre for a reason. It’s the core of what a business is doing. Why are they doing what they do? What is the motivation behind it? What are they trying to achieve? This is where the eventual BUY IN to the brand manifests itself. This is well documented by author and motivational speaker Simon Sinek, and if you haven’t seen it you should watch it here:

The Why is where companies start and then they build in the What and How to create a unique brand.

The next step is Positioning.

Below is an example of how you would map this out. It’s a very standard example, just comparing price and quality on the matrix. However, you can use many other more relevant variables to determine where something is positioned. More importantly, how it is positioned next to others. From this stage, it could be that the product, company or service category you’re in is different to what you initially thought. You may be able to attract different customers with a different agenda and offering. 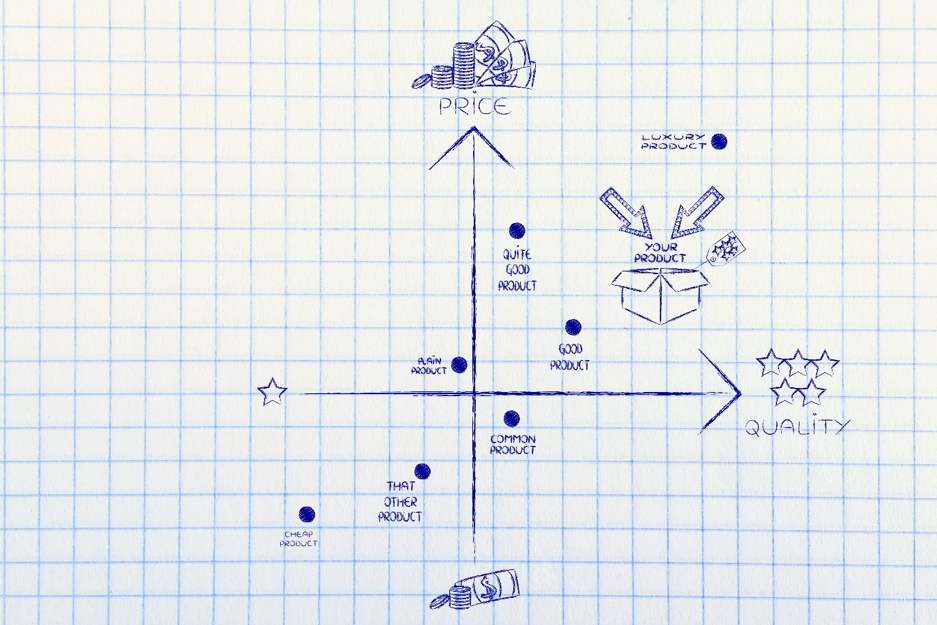 Once this is complete you then build your brand out. There is a golden rule here. It’s not simply about getting your logo, website and various mediums out there so that everyone knows who you are. If you do that you will have dismissed the previous stages. The rule is to use  ‘Search-based targeting.’

In short, this is about ensuring that your product, service, etc; is targeted towards and found by the RIGHT people.

A good way many businesses do this is by association – linking up with another brand that your own values are associated with.

Brands can go to extreme lengths to develop their identity. A famous example of this is Cadbury’s. They tried to secure the shade of purple as exclusively theirs. After 20 years of legal dispute they eventually lost their battle, and you can check out that story here.

Maybe my company Purple Patch Consulting could have a better chance of trademarking the colour purple?

So I’ve discussed some of the steps in creating brands in the business world. So how do you apply these ideas to promoting yourself? You need to know and understand your offering and what makes you different. What is your ‘Why’? Who is your target audience?

What sort of organisations or companies and types of roles do you look for? What sort of image are you projecting through your social media presence? How do you see yourself or want to be seen? What or who would you like to associate yourself with?

I spoke to Keith Cox, Creative Consultant at macparkcreative.com about people as brands.
Embed from Getty Images

“Beyonce is a perfect example. She started out as the lead singer in the pop band, Destiny’s Child, belting out songs like ‘Survivor’ and ‘Independent Women’, appealing to the new girl power generation of the late ’90s. Her solo career has been even more astronomical, dropping hit record after hit record, winning both commercial and critical acclaim, as well as a stack of awards. She is constantly taking on new challenges, so now she’s renowned not just as an exceptional singer, but as a songwriter, actress, dancer and record producer. Each new direction, each new achievement, has added to the aura of the Beyonce brand. Now, her fanatical social media following in the Beyhive actually does a lot of the marketing for her (‘Run the World’, for example, sold 828,773 copies in 3 days with no marketing). Today, Beyonce is a multi-talented brand powerhouse: a musical diva, style goddess, multi-tasking mamma, fashion designer and business mogul. She has transcended her pop star status to become a true cultural icon.”

“It’s also interesting to analyse David Beckham to see how he became ‘Brand Beckham’. He was a decent  first grade professional footballer but not a top player. So how did he become so famous? He’s a very presentable guy so that led him into contracts outside of football in modelling and fashion. He upped the ante by marrying a Spice Girl and they were often seen around town as a glamour couple ‘Posh and Becks’. He traded one famous football club (Manchester United) for another (Real Madrid). He changed his hairstyle frequently and had a huge social media presence. Every step of the way he has carefully cultivated his image so that to many of the younger generation who never saw him play, he’s now more famous for being Beckham than he is for being a footballer.”

How about you? What sort of personal brand do you want to develop? How do you come up on social media? Is it how you see yourself and want to be seen? It’s a good idea to Google yourself every now and then to see if you like what you see. Potential employers do this. You may have different social media profiles, dealing with different perspective of your life. Great on their own, but can these be incongruent or distracting on Google Search?

We are giving away a FREE tool to help you follow these processes to create your personal brand. Simply email me at tom@purplepatchconsulting.com and it will be sent to you!